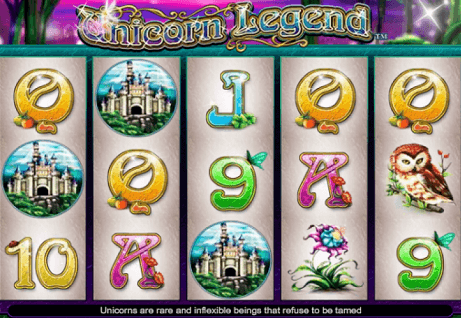 Against a scene of vivid green trees lit by a purple sunset, with fairies drifting through the air like tiny stars, the Unicorn Legend reels hang in a simple coloured frame. This title is a five-reel video slot from NextGen, although licensing agreements make it available to players in Amaya online and mobile casinos. It doesn’t have a plot as such, but it uses plenty of fairy-tale elements to tie in to the magical theme. The music builds atmosphere with its ethereal mix of strings and bubbling percussion.

However, Unicorn Legend is a fairly straightforward slot game. Instead of the elaborate extras available on some online slots, the only bonuses players can expect apart from the payline wins here are a Wild and a Free Spins round. Both the 25 paylines and the bets per line are adjustable, and players can stake between 0.02 and 5.00 per line at various pre-set levels. With the top multiplier in the Free Spins round, a win as high as 24,000 credits on a single payline is possible.

Rich colours and detailed designs keep the symbols in Unicorn Legend interesting, and players can choose either to trigger each spin manually, or engage the Auto Play to launch up to 500 spins automatically. Low values are won by the six symbols taken from the card deck: 9, 10, J, Q, K and A. These come in a variety of colours, the curly font livened up with the creatures, flowers and fruits of the enchanted forest. They are arranged in pairs with matching prize values, rising as high as 200 credits for a payline with five As or Ks.

Two higher-value symbols also share the same prize values: a mystical jewelled flower and a wise owl. They win 25, 60 or 500 credits for three, four or five consecutive matches from Reel 1 on the same payline. The fairy-tale castle and a rainbow-winged fairy, the highest-value Unicorn Legend payline icons, win a consolation 2 credits for just two matches, rising as high as 1,000 or 2,000 credits, respectively, for five of a kind.

Not surprisingly, a fine white unicorn with a billowing mane is the Unicorn Legend’s Wild symbol. Like wilds in many Android slots in Canada at https://onlinecasinobc.net/android, it appears only on Reels 2, 3 and 4, so it cannot make its own payline wins; its only function is as a substitute for other payline symbols. When the Wild is part of a winning payline, it delivers the game’s most impressive animation as it rears and whinnies.

A multi-coloured, intricate symmetrical emblem serves as the Scatter in Unicorn Legend. It wins 2X, 4X, 20X or 200X the complete spin bet for two, three, four or five matches in any position. Three or more Scatters also trigger the Free Spins, which play on the same reels, except in bright daylight.