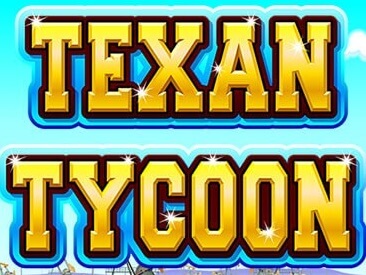 Texan Tycoon is a five-reel online video slots game with 25 paylines from Realtime Gaming that makes a theme of a mesh of The Beverly Hillbillies and Dallas television shows. Fans of either these programmes will appreciate the slot’s uncommon setting: the slots game tells the story of how Texans who made their fortune drilling oil in that state did so. It features a progressive jackpot prize for players to try for, as well as a free spins bonus feature to boost players’ bankrolls on their way to it.

The Call of Crude Oil with Texas Tycoon

Texan Tycoon online slots will take players on a treasure hunt for the riches of a crude oil find where they will encounter the character the game is named for. There are other symbols which represent the Texas experience of old: oil wells; oil drums; oil rigs; piles of money; and the trucks used to transport the oil, as well as various poker-card symbols which make up the remaining icons.

Realtime Gaming has gone full-tilt with Texan Tycoon, and even their slot features are larger than life for this game. Scatter payouts multiply bets by as much as 200 times when five of the oil well symbols appear on the game’s reels, and the wild tycoon also acts as a multiplier for players’ winnings, offering as much as 10x whenever he substitutes for a symbol in order to create a winning combination. The icon featuring the stack of cash is the key to the game’s biggest payout, however: when five of these appear, a credit of 1 500 will be paid, along with a multiplier of ten.

Texan Tycoon also features a progressive jackpot prize that is randomly awarded and can be paid out any time a spin is completed. The amount at which this prize stands is always shown along the top of the reels –and any player, at any point of play, is in the running for this payout.

There is a free games feature for Texan Tycoon online slots: when a minimum of three of the scatter symbols, the oil wells, land on players’ reels, a pick-me feature triggers. Players are asked to choose one of the oil well icons displayed, with one able to deliver as many as 25 free spins. Any wins incurred by the player during these free spins are subject to a multiplier of three, and there is also the chance that these free spins can be retriggered indefinitely –a limit as large as a ten-gallon hat, it could be said.

The limits for Texan Tycoon casino game are able to encompass a wide range of bet preferences, from more conservative amounts to those that get the adrenaline pumping: players are able to start out at just 0.01 on just one payline, to a maximum of 125 with all paylines active. High-rollers; micro-limit slots players and everyone in between are catered for.