Tropicana Las Vegas is a hotel and casino complex situated on the Las Vegas Strip in Nevada. The complex is owned by the Penn National Gaming group. The hotel itself offers over a thousand rooms and a large casino and gaming floor. There are also convention and exhibition space that can be hired.

The hotel and casino is located on such a busy intersection of roads that pedestrians are not even allowed to cross the road at street level. They have to use overhead pedestrian bridges to the neighbouring hotels and casinos.

A Long and Diverse History

The Tropicana Las Vegas hotel and casino has had a varied and exciting history since its inception in 1957. There have been different owners over the years, some of whom have had to sell their shares due to links with organised crime mobsters like Frank Costello. In 1986, the twenty one storey Island Tower was constructed, and the oldest win, dating from the 1957 original building, was demolished to open up space for additional parking. The Tropicana Las Vegas was bought by the present owners in 2015. 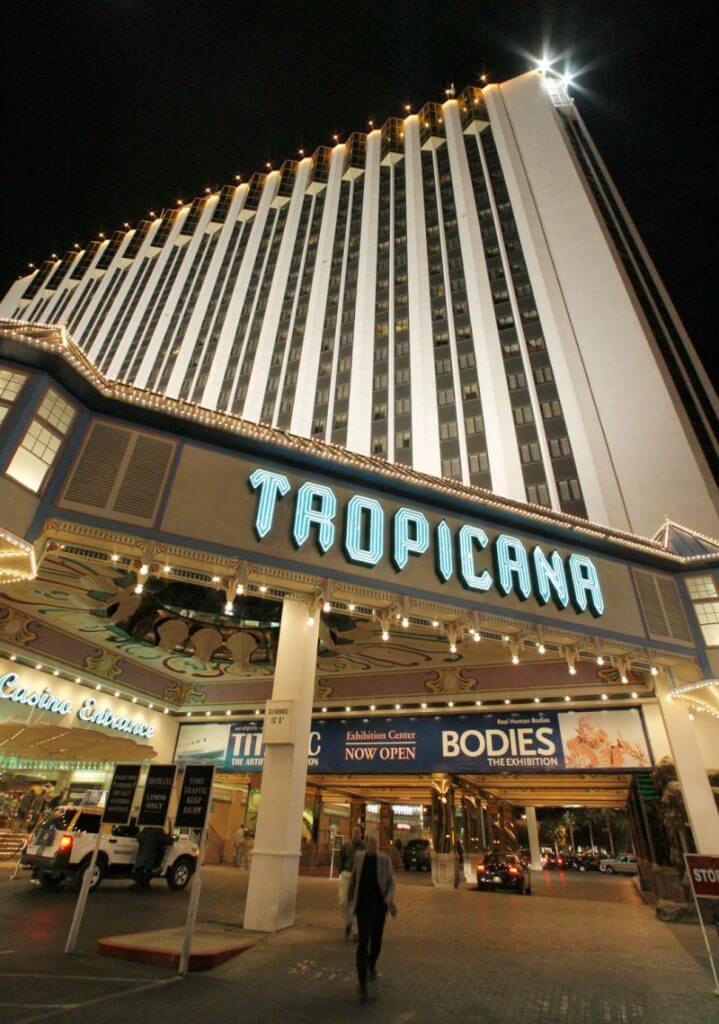 The Famous Folies Bergere Show was Part of the Entertainment

From 1959, the Tropicana Las Vegas hosted the world famous Folies Bergere Show, the longest running theatre show in Las Vegas. It closed in 2009, just before the fiftieth anniversary of the show.

In addition to the casino, the Tropicana Las Vegas entertainment features a large swimming pool, tropical landscaping, waterfalls and an outdoor bar. They also offer a wedding chapel, with a Rock Star Wedding package with former rock singer and now an ordained minister officiating.

There is a wide range of table games you can play in the casino at Tropicana Las Vegas. You can play blackjack, mini baccarat, and Double ball roulette as well as the traditional form of roulette, craps and different versions of poker, like Pai Gow and the Ultimate Texas Hold’em. They have recently introduced two new poker games, Mississippi Stud and High Card Flush, both of which are easy to learn and play. A new sports book was introduced in 2011. Race and sports betting is very popular in Las Vegas, and at the Tropicana Las Vegas there is a special area with sixty two personal betting stations equipped with touch screens and ceiling speakers.

Tropicana Las Vegas casino offers more than eight hundred slots games, from the single and multi line games to the progressive jackpot games, like Wheel of Fortune and Mega Bucks, and with their huge rewards. The most popular slots games include top new games like Money Rain and Buffalo Gold often played at https://mobilepokiesnz.co.nz/mobile-casinos/. It is wise to check before you start playing, as new games are being added regularly every month.

Tropicana Las Vegas has recently joined the group of Marquee Rewards properties. This will entitle you to play and earn comp points and dollars at the Tropicana, and then use at any of the other Marquee rewards casinos as well.